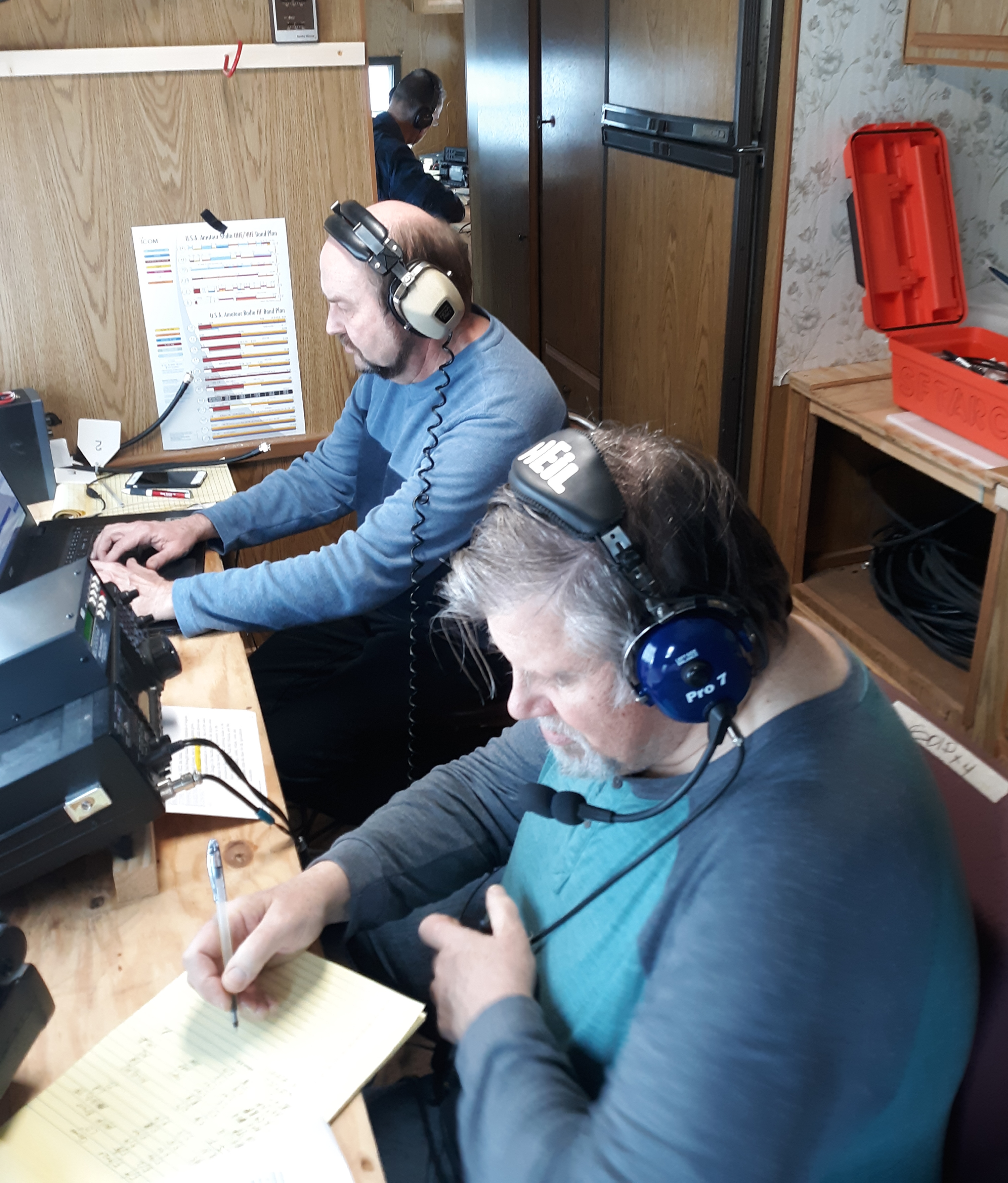 No one heard members of the Santa Fe Trail Amateur Radio Club singing "Home on the Range" Saturday, Jan. 25, but amateur radio operators from Alaska to Florida and from California to New York did hear hams who belong to the Olathe-based club readily identify themselves as being Kansans during a special pre-Kansas Day event at Sawyer Memorial Antenna Park in Edgerton.

Operating inside a vintage camper and using the club call sign of KS0KS, eight members of the club took to the airways in an effort to hook up with as many other hams as possible over a five-hour period to let them know that the Sunflower State was getting ready to observe yet another birthday. Club members worked in pairs part of the time, the one ham sending out a general invitation to respond to his call while the other waited patiently to log the date and time, the mode, band and frequency, the respondent's first name, call sign and location, and other important information whenever a contact was made.

In the photograph accompanying this story, Joe Krout, KR0UT, right, is pictured as he looks to make another voice contact with a fellow amateur radio operator while Tom Apalenek, WA2IVD, logs the information from the previous contact. Visible in the background is Marty Peters, KE0PEZ, who is manning the CW station.

From 10 a.m. to 3 p.m., the hams were able to connect with amateur radio operators in Canada and a number of the other states, including Alaska, Michigan, Mississippi, Florida, South Carolina, South Dakota, California, Washington, Indiana, Illinois, Ohio, Tennessee and New York, in getting out the word that Kansas' BIG DAY was fast approaching.

"Rick, we had a great day on the air," club member and SMAP owner Del Sawyer, K0DDS, told me in an email the afternoon of Sunday, Jan. 26. "We had a total of 140 contacts, 20 with Morse code and the rest on single sideband."

Admitted to the Union Jan. 29, 1861 as the 34th state and as a free state at that (that is part of a much larger story, of course), Kansas turned 159 years old four days after the special event at Del's "antenna farm." In 1861, the Morse code had been in use for more than 15 years as a means of communication for commercial or governmental purposes, but it would be another 50 years or so before what came to be known as radio enabled Kansans from Cherokee County to Cheyenne County (i.e., east to west) and from Marshall County to Meade County (i.e., north to south) to keep in touch with each other instantaneously.

Early hams in the land of the Jayhawks, Wildcats, Wheatshockers, Gorillas, Hornets and Tigers included Marshall Ensor, W9BSP and a Gorilla (Pittsburg State University, 1932), and his younger sister Loretta, W9UA, who grew up in the Bonita community on the family dairy farm located along 183rd Street in southern Johnson County. Today, their story is told and retold at Ensor Park and Museum, 18995 W. 183rd, where club members serve as hosts and tour guides on weekends two months a year.

Asked what he likes most about Kansas, Del gave me a simple two-word answer: "The weather." Bob Shaumeyer, KC0TZX, also mentioned the weather but elaborated. "The weather because it's variable," he replied. "It's variable. You don't get bored with the same thing. I prefer a tornado that I know is coming in to an earthquake that sneaks up on you."

The answers I got from Marty, Howard Cripe, N0AZ, and Jim Andera, K0NK, had something to do with either the landscape or the location. Marty, a would-be poet perhaps, responded with this: "The wide sky, the smooth flank of the Flint Hills." Howard, who grew up in Garden City, said, "I like the plains, the flat." And Jim made this observation from "flyover country," as those who live on the East Coast or the West Coast are fond of saying in referring to the Midwest: "I'm pretty close to the middle of nowhere and that's a good thing."

People figured prominently in the replies I received from Joe, Tom and Gil Ludwig, WA0YCY. "It's where my family's from," said Joe, whose ancestors settled in the Olathe area back in the 1870s and whose father, Harry Krout, W0YQG SK, was a student of Marshall Ensor, a manual arts instructor at Olathe High School, in the 1940s. Offered Tom, who moved to the state from upstate New York by way of southern California in October 2018, "The people, especially Patrick Mahomes," although the Kansas City Chiefs' quarterback, word has it, actually lives just beyond the Kansas-Missouri state line in Missouri. Finally, Gil, who moved from Washington, D.C., to Gardner 10 years ago to one, marry his high school sweetheart, and two, wrap up his job with Sprint, told me that he enjoys "the clean air and the chance to operate ham radio with a very diverse group of people and the antenna farm Del built here in Edgerton."

For more information about Kansas, which produced America's 34th President in Dwight D. Eisenhower, and its rich history, visit the Kansas State Historical Society website at: